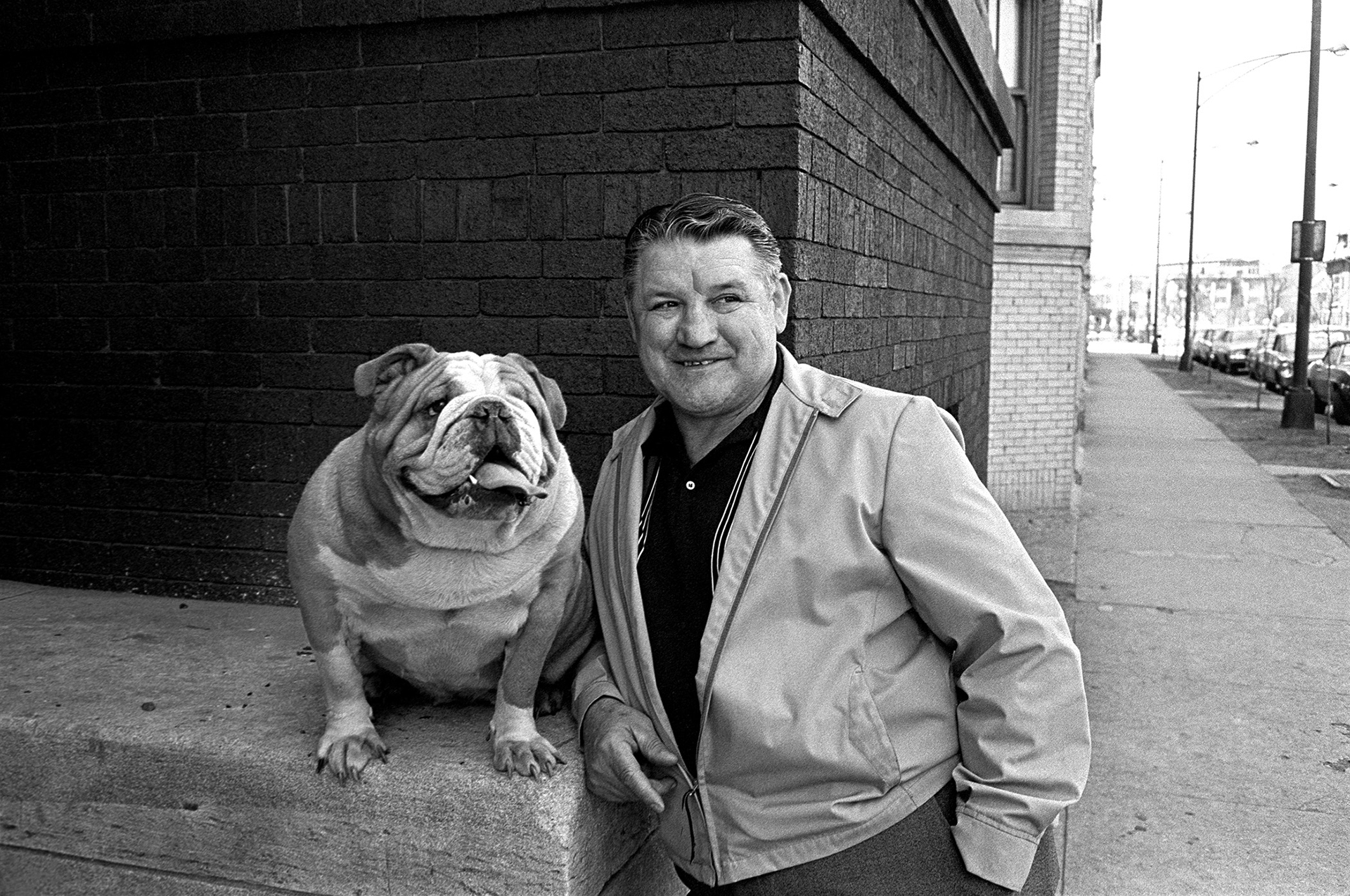 Portraits of Chicagoans by South Side Native Patrick D. Pagnano

An exclusive look at the early work of Patrick D. Pagnano, who used photography to uplift the working class.

Coming of age of Chicago’s famous South Side during the 1950s and ‘60s, second-generation Italian American photographer Patrick D. Pagnano (1947-2018) was shaped by working-class values. Centered by his love of family and community, Pagnano was driven by a sense of purpose, searching for a way to use his talents to uplift and support the everyday people he encountered throughout his life.

His paternal grandparents Angelina and Pasquale Pagnano arrived in the United State in 1920 when they were both 28. Like many immigrants, they came to this country with little more than their immediate belongings and a belief in the American Dream. They settled into an enclave of Chicago around Taylor Street known as Little Italy, finding community among those who made a similar journey. They built a multigenerational home for family, bringing the traditions of the old world along, creating a firm foundation for their children and grandchildren.

But, as the family would soon learn, the American Dream was not everything it appeared to be — certainly not for the working class, whose successes and accomplishments could be seized by the government under the practice of eminent domain. After serving in World War II, Pagnano’s father Nick opened a grocery store in a predominantly Black, low-income neighborhood in the Near North Side area of the city. He extended credit to customers who struggle to pay, and Nick Pagnano managed to keep the business afloat despite occasional burglaries and robberies — until the Illinois government seized the land as part of an “urban renewal” campaign.

Between 1948-1964, the government closed down businesses and displaced more than 50,000 properties in order to raze the neighborhood in order to build Cabrini-Green Homes, a public housing development that included 23 high-rise towers and 55 low-rise apartment buildings. Horrifically, the development only served to exacerbate issues of crime and poverty afflicting the community. Conditions were so bad that ultimately, the city was forced to tear down the development.

But back in the early 1950s, the Illinois government had grand plans, and once again used eminent domain to displace the family. This time they took the land that lay underneath Pasquale and Angelina’s multi-generational home to build the University of Illinois at Chicago campus. Although the family remained in South Side, these changes had a lasting effect. At a young age Patrick D. Pagnano began to understand that the government and politicians had the power to destroy working-class people’s lives and homes.

A Day in the Life

Despite the harrowing impact of eminent domain, the Pagnano family made a way for themselves and their young children: Nick Jr., Patrick, and Janice. After losing the store, Nick Pagnano became a milkman and took young Patrick on delivery runs, imparting upon him at a young age a powerful work ethic tied to the community.“Pat was a very inquisitive person. He asked a lot of questions and was interested in people and what they had to say. When he spoke to you, he was focused on you. That was his nature,” says his sister Janice Greenenwald, whose voice fills with emotion as she remembers their shared childhood. As the baby sister, she was closest to Pat, as he was just two years older than her.

Greenenwald thinks back to their youth, remembering the times spent playing on the block with local kids during the summers. “We used to put on little shows in our backyard, and would charge everyone to come to see it,” she says. “We would get cleaned up for dinner, then everyone came back outside to play until the street lights came on. Pat used to watch out for me. He was quite a character.”

Kari Pagnano, Pat’s wife of 44 years, first met him in Chicago in 1968. She remembers, “Pat had a really close group of guy friends, all mixed — Italian, Mexican, Irish, Polish, Jewish, and Yugoslavian. They all hung out together, riding around in their cars, listening to Motown.”

But like many other teen boys, they sometimes fought with guys from neighboring towns over territory or girls. “They were roughnecks from blue-collar working-class backgrounds, and if one of them got into a fight they all jumped in to protect each other,” Kari says. “Pat hated it, and was always trying to talk everyone down.”

As Patrick D. Pagnano got older, he grappled to find his niche. Searching for purpose, he took a job working at a dairy in order to pay for school. As the Vietnam War heated up, many of his friends were drafted to serve. Pagnano enlisted in the National Guard in 1967 — and ended up on the frontlines of the war at home. In August 28, 1968, Pagnano was one of 6,000 soldiers and 12,000 police officers deployed to stand guard at the Chicago Amphitheatre during the 1968 Democratic National Convention.

Television cameras captured the riot that broke out on Chicago streets as thousands of Vietnam War protesters gathered to make their voice heard — only to be beaten and gassed by police. As thousands of Vietnam War protesters chanted “The whole world is watching you,” Pagnano took note of what was unfolding before his eyes – a scene that would repeat itself the following day as Pagnano was deployed to stand guard during the Dick Gregory March for “peace and barbecue.”

Mayor Richard Daley refused to grant the protesters a permit so they marched anyway — and faced a barrage of assault by unknown perpetrators who threw bricks from the roofs of nearby buildings at unarmed protesters. Horrified, Pagnano helped guide the wounded protester to safety. Once again, Pagnano saw how the working class was treated by certain powers that be, an experience that helped solidify his loyalty to the people.

In 1970, Patrick D. Pagnano stumbled into photography after obtaining a partial scholarship to Columbia College Chicago, while studying business. He fell in love with street photography, with the image as a document, the one that becomes a historical object, like those of Henri Cartier-Bresson, Robert Frank, or Walker Evans, who elevated the common man and woman to a space once reserved for the elite.

With a camera in hand, Pagnano had finally found his purpose and his voice, using photography as a way to dance through the world. “I really don’t believe an artist and especially a photographer can separate themselves from the real world and because of this I feel that photography has to be responsible,” Pagnano wrote in an undated journal entry. “I don’t like art that entertains.”

Determined to find his own style, Pagnano took to the streets to photograph the world he knew, picturing the resonant beauty of life that could be seen in scenes of joy and pain alike. Kari Pagnano remembers the photograph of The Lady and the Cadillac as a defining moment for Pagnano, explaining how he described to her a feeling of being connected and tuned into his vision the moment he clicked the shutter.

Patrick D. Pagnano switched his major, and received his BA in photography in 1972, before embarking on a career that would take him around the world. These images, made at the outset of that journey offer a window into the people and place that shaped Pagnano’s worldview. No matter where life brought him, he remained a man of the people, committed to uplifting the lives of his community.

Looking at another photograph, the one of a worker resting against a radiator, Kari is reminded of the John Lennon song “Working Class Hero,” observing, “Pat had great respect for the working man and could relate. This was his world growing up — friends, relatives and neighbors. In Pat’s eyes, the working man/woman was a hero. They got up every day and went to work to take care of their families. They contributed greatly to making things in our society run. It took discipline and sacrifice. They did it without whining or complaining and had pride.”

A book of Patrick D. Pagnano’s Empire Roller Disco photographs will be published by Anthology in 2022.

Read More: Roaming the Wild Streets of New York in the 1980s