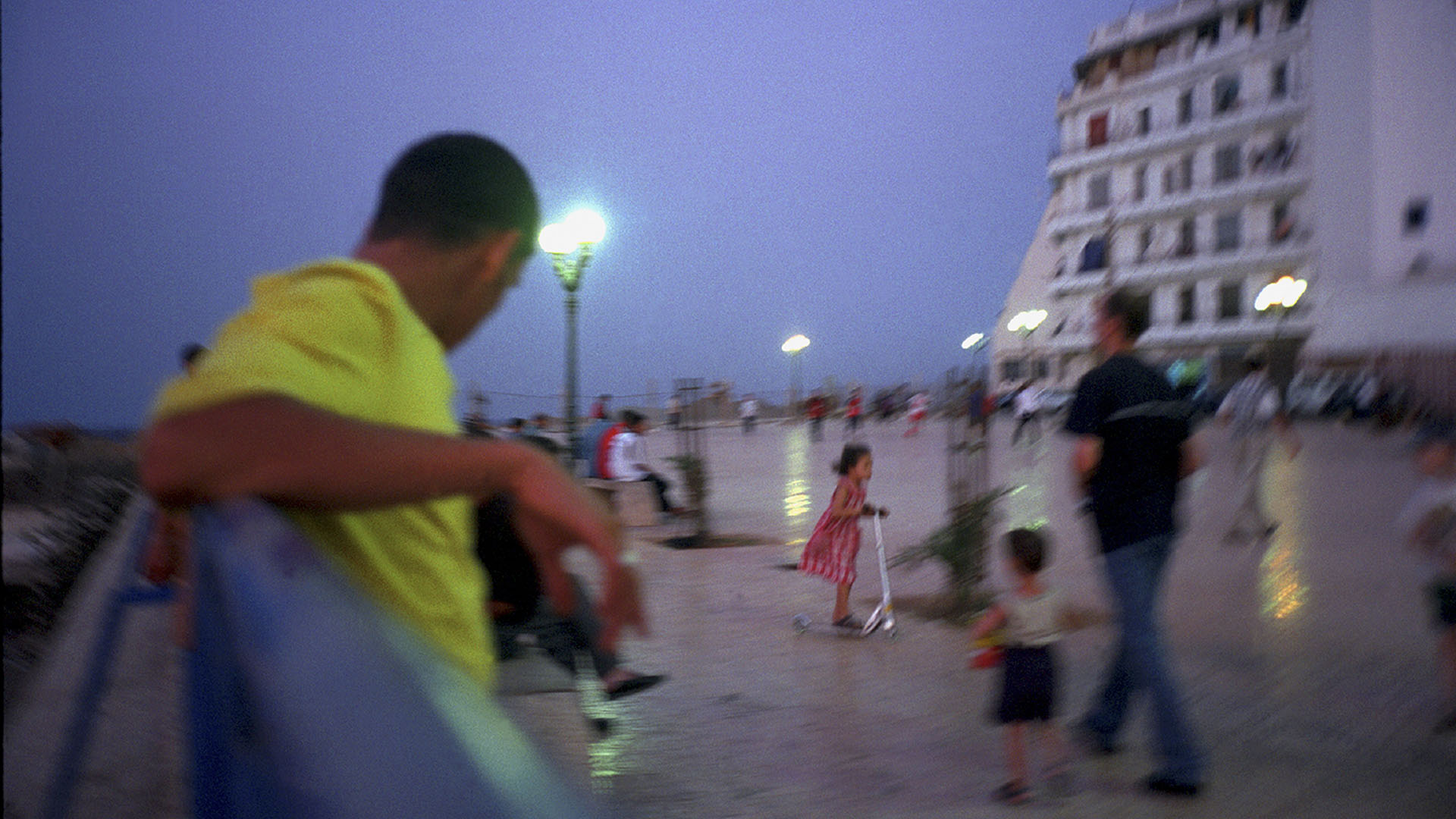 Algeria in Motion by Bruno Boudjelal

On April 27, 1993, Bruno Boudjelal wrote in his journal: “In a few days, I will go to Algeria. I intend to cross the country from east to west and meet up with my family. My father is Algerian and my mother is French, but I don’t know anything about my family over there: my father has always refused to talk to me about his home country.” Bruno Boudjelal was past thirty, worked as travel guide in Southeast Asia, and had never been to Algeria. Neither was he a photographer. Algeria was experiencing what is known as the “dark decade,” a civil war between the Algerian government and various Islamist groups. Bruno Boudjelal was not aware of anything, he only had one goal, a single obsession: “I want[ed] to meet the family,” he said.

Three days before his departure, he had an appointment with his father who failed to show. He phoned him, told him about the upcoming trip, to which his father replied: “I forbid you to go there, I don’t want you setting foot on that soil. In that territory. And besides, it’s not your story.” An argument ensued, and the son finally told the father, “I’m going anyway, it is my story too.” The next day, a friend came by with a camera, and suggested that Bruno Boudjelal take pictures during his stay. Surprised, Bruno rejected the idea at first, but then changed his mind. So he set out for Algeria, a country racked by a civil war, on the trail of his family, a camera in his hand and a Blue Guide in his pocket. A perfect tourist.

Within a single day in Algeria, he was tailed in the Casbah in Algiers, beaten up by a group of men, robbed of his camera lens, taken away by the police, only to end up dragging himself through the streets in a torn, bloodied shirt. Bruno Boudjelal discovered the real face of the country, his country. His acquaintances advised him to leave, but he didn’t give up, he wanted to get to his father’s native village and to do so by taking the most roundabout route. He embarked on a ten-day journey to a forlorn corner in Algeria, among his own people. During this first trip, he did take pictures, some of which would end up being published in Libération, Le Monde, Le Monde Diplomatique, and The Observer.

He was hired by the Sipa agency, but by the end of the year he got bored and quit. He took up his old job as a travel guide in Southeast Asia, but a wrist injury forced him to return to France, and once again he felt drawn to Algeria. “My father wanted us to take the trip together.” Bruno Boudjelal debated whether to take a camera or not, when a dinner with a couple of friends and their daughter helped him decide. They were eating at McDonald’s, and the little girl’s happy meal contained a surprise: a small plastic camera. “I asked her to lend me her camera and she agreed in exchange for a photo.” Bruno Boudjelal brought “this toy” along on his trip, and used it to photograph what he wished, without ever attracting attention or suspicion in a country where photography was frowned upon and even risky. Once again, upon his return from Algeria, he published his images in several newspapers. Thus he began his career as a photographer, a career in which Algeria would play a key role.

The exhibition, “Détours-Retour: Les voyages en Algérie 1993–2013”, at the Arsenal in the Cité Musicale-Metz, surveys twenty years of Bruno Boudjelal’s Algeria. The country has become a source of images and stories for Bruno Boudjelal. He photographed his family, crisscrossed the country from east to west, and captured original landscapes. His Algeria is as if stolen on the fly by his camera: it’s a blurred Algeria, often incandescent. “The form of my photography is related to the conditions in which I found myself, it was not a formal choice on my part. My photography speaks of failure, of the impossibility of photographing any way other than as I did.” It’s a failure that makes sense. “The form of my photography speaks to the absence of photographic practice in Algeria at that time.”

The photographer delineates, and that’s how he photographs places that are outside his daily routine. Delineating also allows him to avoid problems. “My photography is photography in motion.” The exhibition breaks off with 2013, that is six years before the beginning of the Algerian Hirak movement. When asked why he, who is so attached to this country, never documented this popular uprising, Bruno Boudjelal replied: “I was in Algeria at that time, but I was working on a series about sites of massacres. It would have been too risky to participate in the revolution while pursuing my project.” Revolutions and the duty to remember go hand in hand. There is no successful revolution without questioning the past. While some demonstrate, others excavate to establish new pillars for the country to come. Bruno Boudjelal has simply adjusted his pace.