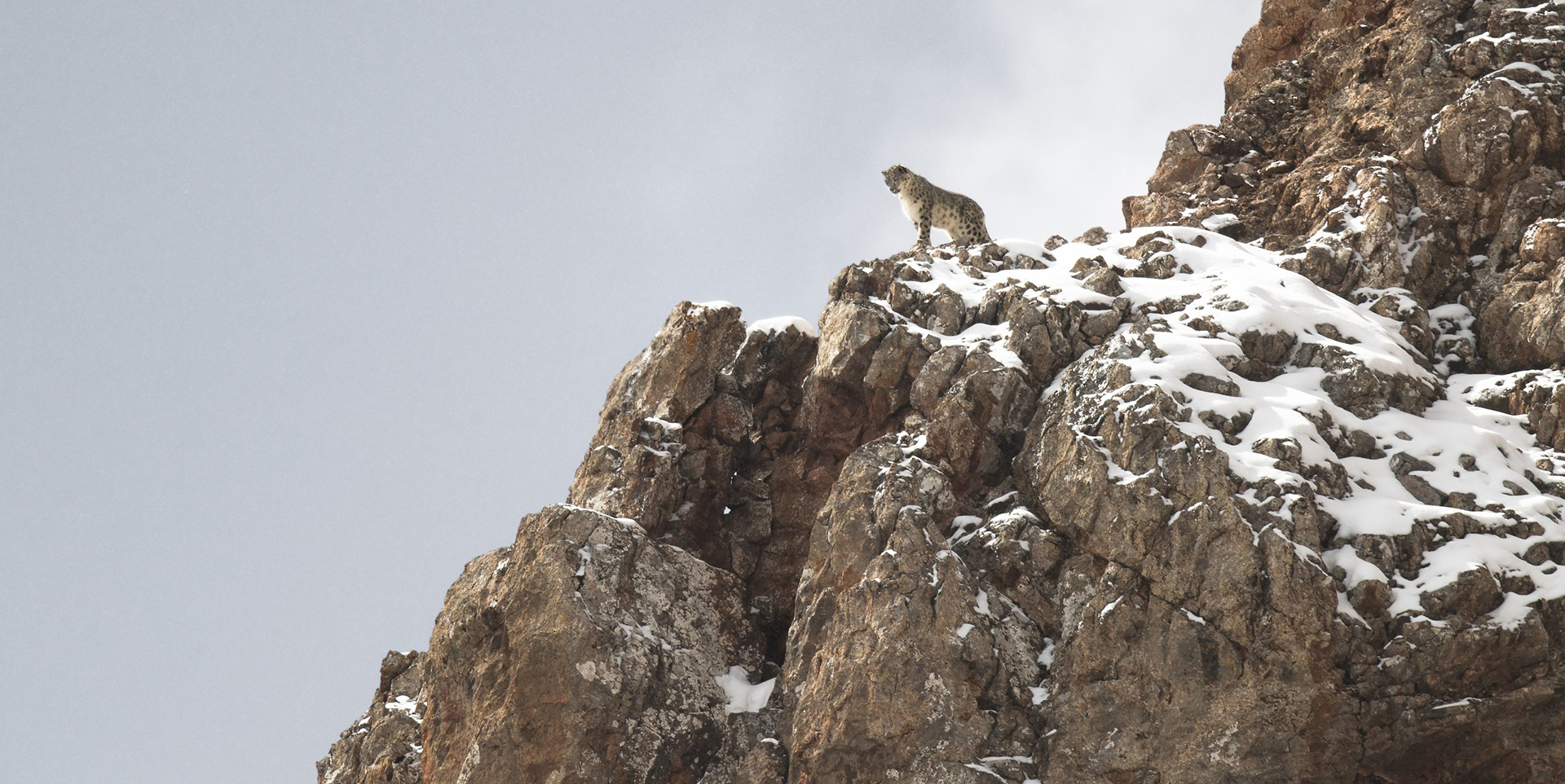 The film Velvet Queen (orig., La Panthère des Neiges) directed by Marie Amiguet opens in theaters on December 15. It documents the quest to find the Tibetan snow leopard and tells the story of a fabulous friendship between the wildlife photographer Vincent Munier and the writer Sylvain Tesson. It’s also a film about a way of life, about the art of lying in wait.

Sensitized to wildlife from a very young age by his naturalist father, Vincent Munier turned his wonder for nature into a profession by becoming a wildlife photographer. Eternal nature lover, Vincent Munier has traveled to the remotest corners of the world. During his solo expeditions he encountered animal species such as the snowy owl, the musk ox, the brown bear, and the wild yak. These phantasmagorical creatures, inaccessible to the average mortal, offer themselves to his lens in all their magnificence. Heirs to a wild world, they are today in danger. Vincent Munier photographs them in order to capture and share their beauty, to raise awareness. As he explains, “I am committed to building bridges: I want to convey the wonder, follow the slow rhythm of nature, which becomes your own over hours and hours of observation.”

A geographer by training, Sylvain Tesson is a writer and traveler. As soon as he graduated, he took off on many trips, coming back with rolls of film and notebooks full of writing which, transformed into books, would earn him many awards, such as the Prix Goncourt or the Prix Renaudot. Iceland by bike, the Himalayas on foot, the steppes of Central Asia on horseback, Russia in the footsteps of gulag escapees, six months as a hermit in the forests of Siberia: Sylvain Tesson recounts these adventures with passion and commitment.

Brought together by their shared passion for nature and travel, Vincent Munier and Sylvain Tesson were fated to meet. The two intrepid, solitary wolves quickly struck a friendship. One day, the writer expressed the desire to follow his photographer friend and observe him during his wildlife vigils.

Vincent Munier, who had embarked on a long-term book project in Tibet in 2011, decided to shoot a film about the region using only a minimal crew. He invited the writer to accompany him during his seventh or eighth expedition. As Sylvain Tesson puts it, “Getting my fill of the beauty I could glean and of those real-life dreams is, I feel, no longer enough. I aspire to share these experiences, to draw attention to the urgency of escaping our intensified anthropocentrism, the devastating hegemony of humans over all other species. Thinking of the fate of all these animals trapped in habitats we keep shrinking breaks my heart! Yet, it is difficult to convey this dimension through images alone, especially when one has chosen, as I have, to show beauty rather than devastation. I feel it is necessary to foreground the wonder which I try to transmit in my photographs through a constructed, committed discourse.”

The idea of following Vincent Munier and finding the snow leopard was a dream come true. The writer savored his good fortune: “It would be my chance to learn the art of stalking. So far, I had been content to roam the land. Over dozens of trips to Central Asia, I had become accustomed to crossing vast expanses stretching as far as the eye could see. In short, I followed the wind. Now, I, an adept at the art of evasion, have been given the opportunity to stalk wildlife. With Munier at my side, my relationship to the world has taken another turn. It is no longer a question of making headway. Now, we get to the mountain, we wait, we observe, and sometimes watch an animal come into view. The naturalist photographer does not hurtle through space; rather, he settles in time.”

And so the two adventure seekers scaled the Tibetan plateaus which sit as high as 16,000 feet above sea level, surrounded by snow-covered peaks. They advanced under the discreet gaze of the film director Marie Amiguet, whose work as director of photography in Jean-Michel Bertrand’s The Valley of the Wolves (orig. La Vallée des Loups) had caught Vincent Munier’s eye. Having become his life partner since their meeting in 2017, Marie Amiguet joined Munier on his long-running (since 2011) photography and video project in Tibet. What interested her in this latest Tibetan expedition was to film the meeting of two enlightened minds, as she puts it. “I wanted to film, in fact, the encounter between two men from different worlds. I was curious to see the sparks flying between, on the one hand, Vincent, a man very sensitive to nature, obsessed with beauty, and rather taciturn, and, on the other, this voluble writer who burns a candle at both ends.” The film director has managed to capture, in a natural and precise way, the interactions between the two men who weren’t at all disturbed by the presence of the camera. But Amiguet’s approach is also very committed: “The film will be useful only if it provokes real reflection and raises awareness about the little space we leave today to wildlife. I strongly feel it’s high time we change the paradigm.”

The film opens with a scene showing a flock of yaks trying to escape an offensive mounted by a pack of wolves. One lamb is attacked and then devoured by the pack before the eyes of its helpless mother. We are in the wild, beautiful yet daunting. “In nature yet unmarked by human hand,” where every animal — predator and prey alike — contributes to the balance of the ecosystem. Living in society, humans have distanced themselves from, and became foreign to, the natural environment of their origin.

Surveying the mountain passes, sitting or lying down, sometimes in camouflage, the photographer and the writer scan the seemingly inert Tibetan landscape for signs of their photographic subjects. While the snow leopard is the legendary animal they are looking for, as Vincent Munier says, it is “only a pretext — a magnificent pretext but one nevertheless.” The expedition is driven by the desire to discover wildlife in its plenitude, from the little redstart to the fox, from the bharal and the antelope to the grey wolf. The snow leopard is just “the emblem of all this diversity,” notes Marie Amiguet.

Watching, observing, scanning, and above all avoiding being detected. Because while the animals are invisible, hidden behind rocks or huddled in their burrows, they are alert to these two strange creatures.

A sublime image: like shadows, stags emerge steaming in the golden light of an icy dawn, their roaring emanating as if from the depths of the earth. We see the windswept land of steel and stone and hear the dull thud of the mountain. A yak comes into view, a heavy, compact, prehistoric creature, a mountain among mountains. Munier immortalizes these animals in pictures which make them appear to be dancing in place, their shaggy hair sometimes forming a robe, sometimes a suit of armor. These are dark and primitive beings moving in the light of the rising sun. “Totems propelled beyond the ages … vessels of halted time,” as Sylvain Tesson poetically describes them.

Using the art of stalking, Vincent Munier and Sylvain Tesson reconnect with nature that teems with life and beings. Sylvain Tesson realizes to what extent his traveling companion is at one with the natural world when his gaze betrays a certain impatience or weariness. “I was struck by the way our friend looked at the landscape. He was reading it the way one reads a poem or the way a musician follows a score. His eyes peeled at the rocky ledges, the rock face, the crevices, he would explain to us what was likely to happen.” During his expeditions, proceeding by instinct, Vincent Munier exists in complete harmony with nature: “Your being absorbs everything: all your senses are mobilized; you seem to vibrate with the space and are inhabited by the life around you. Your emotions are literally heightened, and your animal side finally finds a means to express itself.”

In addition to revealing the beauty of the creatures and stirring our sense of wonder, the film takes the viewer, seated comfortably in a darkened room, into the heart of the landscape: we find ourselves scanning the rock face and rejoicing at the slightest track, footprint, or the presence of the smallest animal. The film brings out the promise of the instinct that lies dormant in each of us, and awakens the desire for a contemplative life, far from the tumult of the city. We leave the theater with the impression of having lived and of carrying within us something precious — like a snow globe in which the panther roams free at the Roof of the World — and the crazy desire that we too might ask Vincent Munier to take us along on his next journey.

La Panthère des Neiges (Velvet Queen), directed by Vincent Munier and Marie Amiguet, in American theaters from December 22, 2021 and in the UK and Irish theaters from 29 April, 2022.